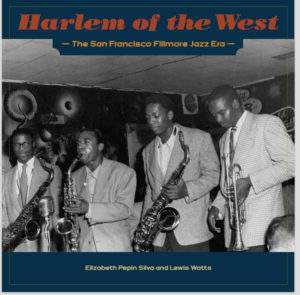 The Harlem of the West SF Project is a book, website and photographic exhibit that celebrates the bustling Fillmore jazz era of the 1940s and 1950s, a period when the Fillmore was a vibrant neighborhood of more than two dozen nightclubs and music venues within its one square mile—all of which virtually vanished due to redevelopment in the 1960s. The project celebrates a unique and rediscovered chapter in jazz history and the African American experience on the West Coast. www.harlemofthewestsf.com

…Fillmore’s story is a cautionary tale for all communities. It’s relevant to Ojai because we are having our own discussions right now about what is important to our community, and how to preserve the things that make people want to come to Ojai and sets our town apart from other towns in SoCal, and that when government tries to engineer the remaking of neighborhoods, it usually doesn’t work.

Elizabeth Pepin Silva became interested in the history of the Fillmore in 1986, while researching the history of the Fillmore Auditorium for Bill Graham Presents. Lewis Watts began photographing the neighborhood in the early 1990s. When the two finally met in 1998, while Elizabeth was doing research for a PBS documentary on the Fillmore neighborhood, they realized that they had been on the same path for years. The two decided to join forces and create a book focusing on the Fillmore’s vibrant music scene, with Elizabeth interviewing and writing, and Lewis organizing the photo collections and painstakingly repairing the images that were damaged in order to prepare them for publication.