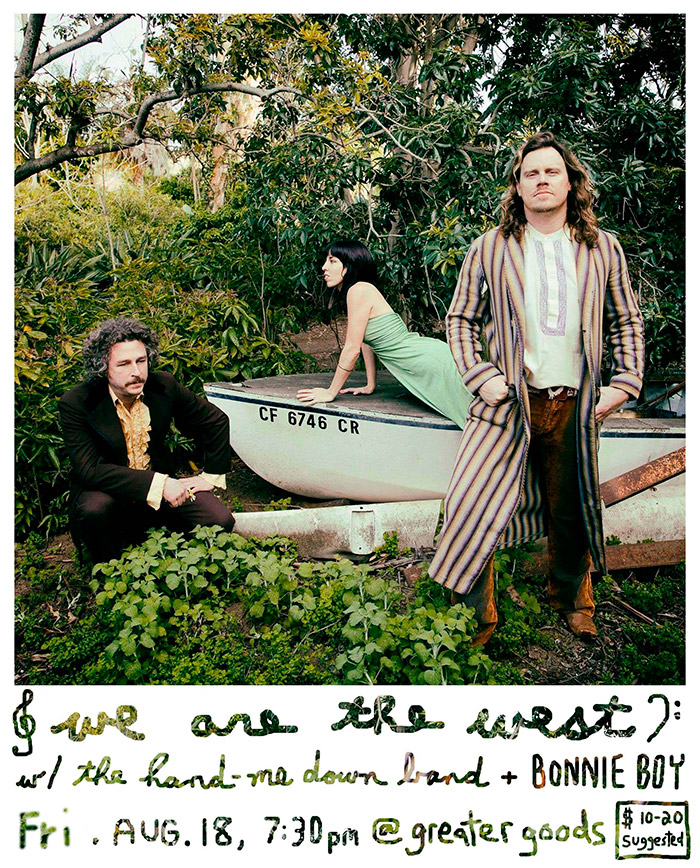 We Are the West

with The Hand-Me-Down Band & Bonnie Boy

Greater Goods is excited to welcome back drummer and vocalist Elizabeth Goodfellow, who last came through Ojai with Alina Bea and OHMME during their west coast tour in May! Now with We Are the West, Goodfellow joins Brett Hool [voice/guitar] and John Kibler [bass/voice] who formed the group during a period of time spent between The Netherlands and Brooklyn, before moving back to California.  Originally described as “a two-man orchestra of stunning vocals, meditative guitar, and exploratory double bass,” the group now includes Goodfellow [drums/voice] and an extended family of musicians, Sylvain Carton [clarinet/saxophone], Ben Tolliday [cello], and Paul Cox [organ].  Often seeking out nontraditional and acoustically inspirational spaces in which to perform and record, their national tours have included performances in natural desert amphitheaters, mine shafts, barns, abandoned convents, and shipping containers, in addition to traditional theaters, festivals, clubs, and galleries.  Onstage they have supported Lord Huron, Pete Yorn, and Nicki Bluhm & the Gramblers, as well as chamber artists Kinan Azmeh [Silk Road Ensemble] and Real Vocal String Quartet.  Their recordings have been featured in compilations for organizations such as Textura, Sound and Motion, and the Surfrider Foundation.