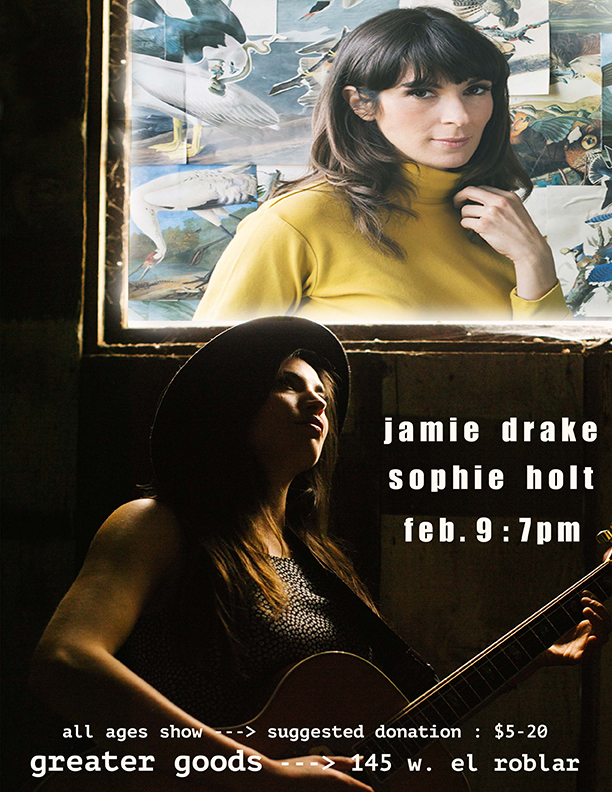 About Jamie
For nearly a decade, Jamie Drake has been a hidden gem within the Los Angeles folk scene. Having sung alongside and collaborated with artists as varied as Jim James, Peter Yarrow (Peter, Paul and Mary), Moby, Ed Helms, Glen Phillips, Sara and Sean Watkins (Nickel Creek), Willie Watson, Susanna Hoffs,Tim Robbins, in addition to frequently lending her voice to film and television (she co-wrote and performed the theme for the upcoming CW show, Life Sentence), Jamie now turns to her own solo efforts with the forthcoming release of her sophomore album, set for release in late 2018. In it, she mixes her folk traditions with modern sounds and adds a generous dose of adventure into uncharted and original musical territory that is wholly her own. www.jamiedrakemusic.com

About Sophie
Sophie is a singer songwriter and multi-instrumentalist currently based in Ojai, California. A classically trained guitarist who studied at Interlochen Arts Academy and the Thornton School of Music at USC, Sophie took to songwriting as an intensely personal and detailed form of self expression, having the powerful ability to communicate with a broader audience. As a lover of all kinds of music, her singing style varies between Folk, Soul, Jazz, Pop and Reggae. www.sophieholtmusic.com