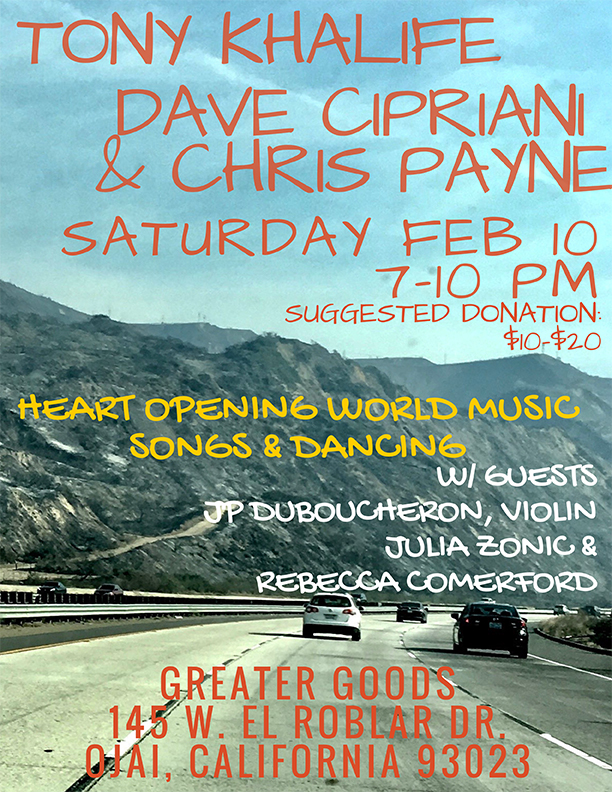 Tony Khalife arrived in Los Angeles in 1984 with two guitars, tuition money and a handful of English words. At the Guitar Institute, his abilities as a guitarist were recognized and he had the privilege of playing with Al DiMeola. But his restless soul pushed him to grow and heal further. He became a direct disciple of Satguru Sant Keshavadas, a singing holy man, studying the life and songs of Indian saints and ancient Vedic rituals in Sanskrit, he served seven years as a Pujari at the Wishwa Shanti Ashrama in Oakland and learned the Tabla with great master drummer Ustad Zakir Hussain. tonykhalifemusic.com

Christopher Payne is a multi-talented instrumentalist who offers original compositions, music scoring, effective string arrangements and sound
design services. Although primarily an acoustic / electric violinist, Chris embraces the technology available to modern musicians. He also plays a wide range of instruments such as mandolin, shakuhachi, Indian flute, theremin, voice, tenor guitar, keyboards and more. His specialty is a one-man string orchestra where violin, viola and cello are recorded and multi-tracked to sound identical to a huge ensemble. christopherpayne.com

Weaving as Meditation with Kate Kilmurray