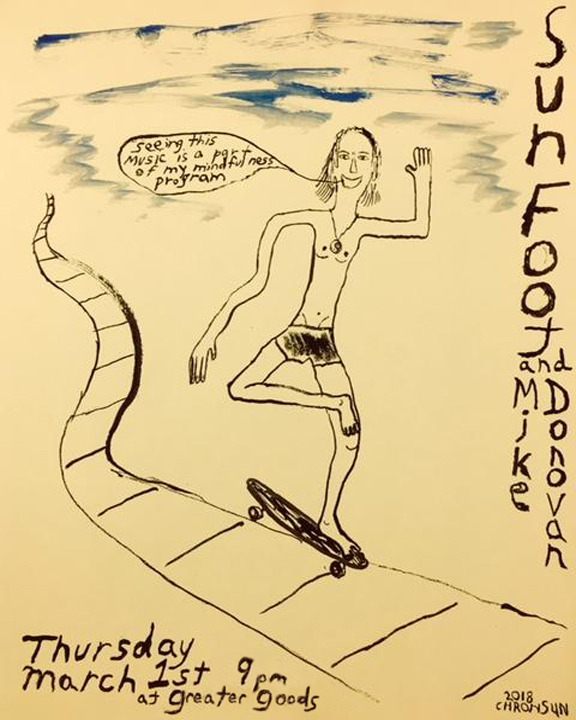 donation based
all ages

Chris Johanson was born in suburban San Jose, California in 1968. He grew up skateboarding, attending punk rock shows, drawing, and with a dry yet sharp sense of humor. He has no formal training in art, learning some technique by painting skateboards and houses. He was a prominent ‘zine artist, and his publication “Karmaboarder,” a skateboarding and art zine he published in the early to late 1980’s, helped shape what later became initial well-known works.

Mike Donovan is a San Francisco, California based musician best known as the guitarist and singer of Sic Alps (2004-2013). He has also released music by other San Francisco musicians with his Dial Records and Folding Cassettes labels. Donovan is a veteran of several other bands. He was a member of The Ropers, The Church Steps with Chris Douglas, NAM, Big Techno Werewolves, Sounds of the Barbary Coast and Yikes. In October 2013 he released his solo debut “Wot” on Drag City. In May 2015, Donovan formed the San Francisco lo-fi supergroup The Peacers, releasing a self-titled debut on July 17, 2015. The self-titled album was co-produced and co-performed by Ty Segall. The current lineup of The Peacers is Mike Donovan, Shayde Sartin, Mike Shoun and Bo Moore. The band release their 2nd record “Introducing The Crimsmen” on Drag City on June 16, 2017.